May I introduce the HOPEWELL MILLIONAIRES

When twelve friends get together in the their hometown for their ten-year high school reunion, they buy a lottery ticket on a whim. They never expected to win the fifty million dollar jackpot.

The first winner is Doug Little, the hero of DOCTOR MILLIONAIRE. 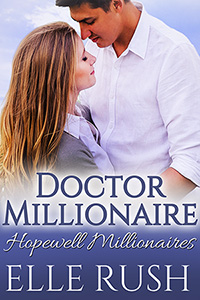 The only reason Dr. Doug Little returned to his dying hometown was to keep a promise. Two years and he’s gone. The only things getting him through his first couple months are his ten-year reunion and working with his old high-school crush.

Although Jackie Dunn loves her quiet world, her small-town life gets even harder when her part-time hospital job is in peril. If not for her friends’ encouragement, she’d head to the city for better opportunities for herself.

At the reunion, all the returning graduates chip in for a lottery ticket, but nobody expects to win the fifty-million-dollar jackpot. Doug’s share should be more than enough to buy his freedom, but the town doesn’t want to let their new doctor go. Jackie is the only thing that makes Hopewell bearable; the problem is the more time he spends with her, the more he forgets how much he wants to leave. When he finally finds a way to escape, Doug realizes he’ll be doing it alone. Jackie doesn’t have much time to show him the life he accidentally created for himself in Hopewell is far better than anything his millions could buy him anywhere else.

DOCTOR MILLIONAIRE will be released on December 1st, but is already up for preorder. Find the link to your preferred store here.