It's the afternoon of Monday of the Labour Day Weekend. And it's officially the end of summer in our garden. Daytime highs are only about 20C, which is enough to leave the tomatoes and peppers on the vine to ripen, but not much more. It's starting to look pretty bare out there. The corn stalks and squash vines are gone. But now you can see the celery that we unwisely planted among the cucumbers thinking they'd get sun. All that are left in the big garden are the carrots, celery, tomatoes, beans, and the second planting of potatoes. It was time to start pulling things.

Even the cucumbers. Especially the cucumbers. We made 18 quarts of pickles (17 dill, 1 sweet). We gave away pounds and pounds of cucumbers. And they wouldn't stop coming. I tried to convince Ross that we had one more batch of bread and bottle pickles in us, but after we finished with he apple jelly today, I looked at him and said that I didn't have another batch in me. The canner had defeated me. We needed to stop the cucumber assault. So we pulled the plants. 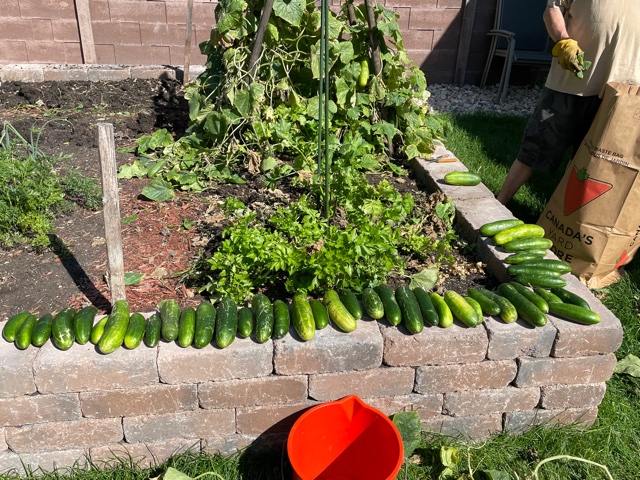 Yeah, that didn't work. We ended up with 8 kg /17.5 lbs of field cucumbers. Those are the ones you see lining the garden wall. And other 4 kg/ 8.5 lbs of pickling cucumbers. Thank goodness for friends and neighbours. We probably pawn off -- I mean, gave away a third of them. But we'll be eating cucumber salad for days.

Then there are the tomatoes. We're picking about 2.5 kg/ 5 lbs every two to three days. We've made 20 lbs into salsa and tomato sauce, but the just keep coming. Fortunately, I remembered that tomatoes can be frozen whole. They'll make more tomato sauce in the winter months, and we'll use them first.

I tried to make a batch of dehydrated apples, but they didn't work so I'm not counting them. If you're interested, I used Goodland apples that we got at the farmer's market. They are supposed to grow well in Manitoba. They were fine fresh, but they did not taste good dried.

I figure we have one more picking of beans, they we'll pull those vines. We still have quite a few green peppers on the plants, which is great, but they're supposed to be red. I don't know if they'll turn without the heat we had last month. I'll also get at least another bucket of herbs to dry.

Anyway, we're out of pint jars. We have 6 quart jars left (out of two dozen) and about half a dozen each of jam jars and mini jam-jars.

I think we had a great run four our first year with the new garden.