A KEEPSAKE CHRISTMAS is available for pre-order

Back in January, the idea for A KEEPSAKE CHRISTMAS came into being. I became one of the Keepsake team of eight wonderful sweet romance writers. Nine months later (how's that for timing), our Christmas anthology is available for pre-order.

I'm very proud to present this amazing collection of sweet holiday romances, and to possibly introduce you to some new writers to enjoy. I've found a lot of my favourite writers in anthologies and now I'm excited to be part of one.

TINSEL AND TEACUPS is part of my Holiday Beach series. If you read Pumpkins and Promises, you may remember Rachel Best (Jordan Portman's new boss at By the Cup) and Owen Daye (with the robber costume at Halloween). If you do, you know that something is already going on between these two. But will in end in romance? (Spoiler - of course! But it's the journey that's the fun part.)

But that's just 12.5% of the romance in this heart-warming collection. Check out who else you can read.

By the way, A KEEPSAKE CHRISTMAS is only $2.99 in pre-order, so grab it while it's on sale! 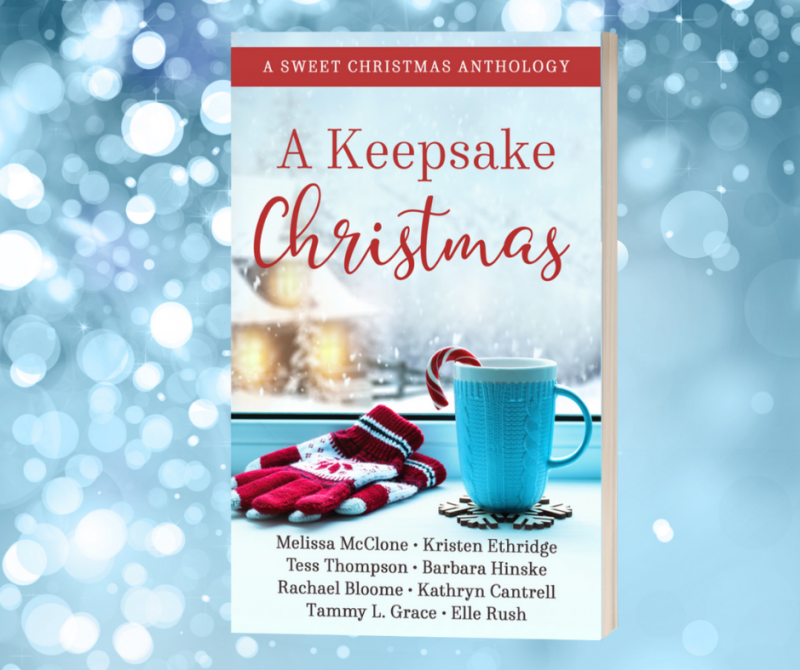 8 special ornaments, 8 special women, 8 memorable Christmases. Bring the spirit of Christmas into your heart with this collection of all new sweet holiday romances set in the popular series of eight bestselling authors.

No Matter How Far by Barbara Hinske. Where hidden treasures can hold the key to a heart and offer an unexpected path home...

A Lot Like Christmas by Kathryn Cantrell. The place where destiny is the ultimate matchmaker. All you have to do is believe.

The Last Cottage on Pinewood Lane by Melissa McClone. Will performing during a Christmas fundraiser bring a former figure-skating star the healing and love that have eluded her? Or will being back under the glaring spotlight only lead to more heartache and regrets?

Tinsel and Teacups by Elle Rush. A bubbly barista and a shy, single-father antique dealer must set aside their rivalry to find the best Christmas teacup ever when they are nominated to run the Holiday Beach food bank fundraiser. Will the spirit of Christmas overcome their competitive streaks?

Blessings on State Street by Rachael Bloome. Abigail Preston wants nothing more than to skip Christmas this year. But her holiday-free hideout in the quaint, charming town of Blessings Bay comes with a mysterious and unexpected house guest. Can two heartbroken strangers find hope and healing in the most Christmassy town on the coast?

One Unforgettable Christmas by Tammy L. Grace. An exhausted ER doctor looking to escape the city. A beach-loving workaholic executive stuck in a snow-covered valley. Will the charm of the town and the magic of the holidays be enough to mend their broken hearts?

The Cowboy's Christmas Wish by Kristen Ethridge. Sarah Murdoch knew bringing her daughter, Jamie, halfway across the country to Port Provident, Texas would cause more anxiety than feel-good Christmas memories. But when Jamie bonds with Grant McCray, the owner of Beachcomber Stables, she begins to come out of her shell.

I'll Be Home For Christmas by Tess Thompson. High school sweethearts Jennifer and Jack were supposed to be together forever. But Jack's one night mistake tore them apart. Will they have the ultimate second chance at love more than 30 years later? Or is the secret she kept from him too much to forgive? Can the magical spirit of Christmas in Emerson Pass bring forgiveness and healing for these two star-crossed lovers?