We may be on vacation but the garden keeps on chugging along.

We've been picking and eating and pickling and freezing all kinds of goodies. 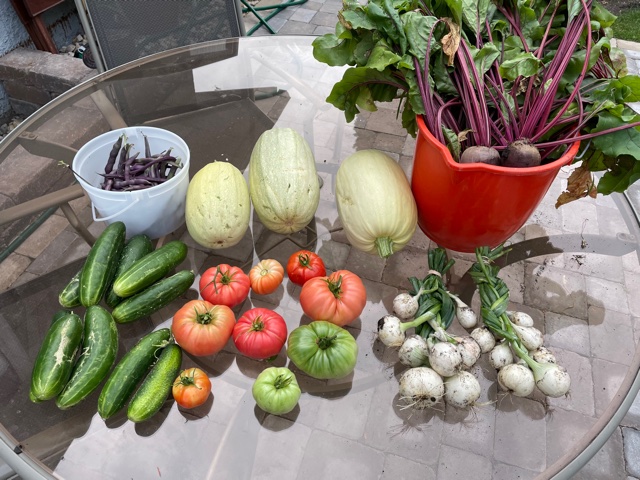 We needed to clean up the tomatoes and prune all the branches that didn't have tomatoes on them. We're in mid-August and most of the tomatoes have not ripened yet, so we need the plants to send energy to the fruit, not slacker branches. We also cleaned up the spaghetti squashes. Two of these we picked deliberately; the last guy decided he was ready and his stem came off when we moved the vine.

We aren't canning all this - a lot of it we are eating fresh. Because we did the work and now we're enjoying the reward.

To be honest, though, the garden is winding down for the year for the most part.

The corn left on the stalks is drying out. I'll try to salvage some for freezing, but it's not good for eating off the cob anymore. The cucumbers have one good picking left. We might try to make another batch of sweet pickles because it will only be 2-3 pints, I think. Most of the onions have been fulled. The beans are almost done. We've processed beets till we can process no more and still have some left.

We still need to pull all the carrots. It's going to rain for the next few days, so we'll do it after that when it's drier. We have one more bunch of onions to pull but we'll give those another week or two. The peppers are starting to come in, and we're going to try to make a batch of pepper jelly this weekend. Ross's second batch of potatoes are growing well, and those will stay in the ground until Thanksgiving. And the tomatoes are just starting to turn red. It's interesting that the giant staking tomatoes are a pink-red while the other varieties are the regular orange-red. I wonder what colour the tomato sauce will be after it goes through the canning process.

Our trip to the farmer's market on Wednesday was a bust; nobody had apples, so we have not been able to make the jelly yet.

Our canning is also coming to an end. We only have apple jelly, pepper jelly (small batch), salsa, and tomato sauce to go. Of course, with all the tomatoes we can see, I think we'll have a dozen jars of sauce at least. That'll be a whole day, for sure.

12 cups of shredded zucchini
Dehydrated zucchini (enough to fill a half-pint jar.) (My sister's neighbour gave her two huge zucchinis and she gave one to me. It was 7.2 kg.)