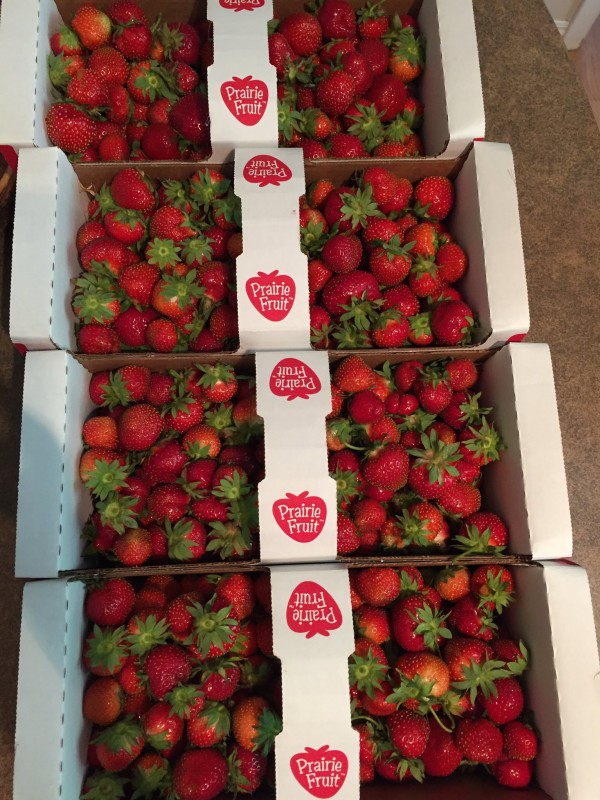 For the last 4 years, we've had a small - 3'x3' - strawberry patch in our garden. In all that time, we picked a total of 1 cup of strawberries, at a push. Last year we couldn't get an appointment at a u-pick farm because everybody was desperate for them. This year, we managed to snag an appointment on July 2nd, and ended up with 4 baskets.  4 baskets of strawberries yielded this bounty, plus another 12 cups in the freezer. 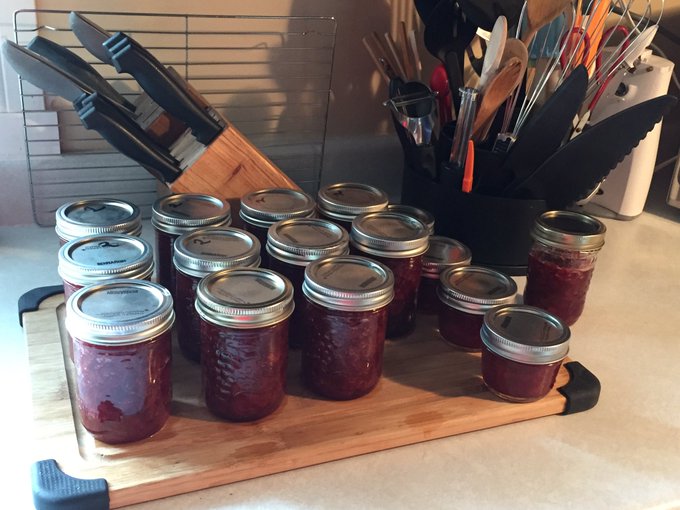 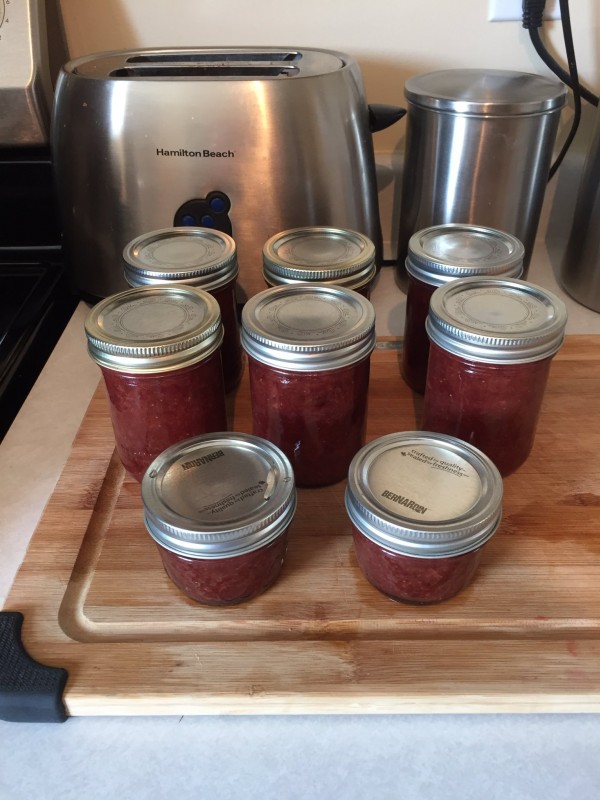 Our spinach came in well. And fast. So fast. I think we could have had more if we hadn't let it bolt (go to seed) but we got one meal from it, and we froze 6 cups. I see dip in our future.

I also got a first picking of basil, oregano, rosemary, and thyme, which I dried and saved.

The celery started getting swamped by the cucumbers, but we did cut back 4 bunches. Some we ate fresh; some we froze.

The peas that were supposed to cover a decorative metal frame failed. We planted 20 peas, got 7 sprouts, only 3 had a decent size, and we got 2 pea pods. Then they died. RIP Peas.

The zucchinis did well in July too. We tried a new variety. Unlike the ones we've planted in previous years, we did not get any monster zucchinis; these were mostly finger sized, so there was a lot of plant for not much vegetable. We enjoyed baked zucchini sticks and a couple batches of zucchini fritters. We did grow three decent sized ones, and ended up with four 2-cup bags of shredded zukes for future fritters or baking. We pulled them at the end of the month because there were none left on the plants to grow. 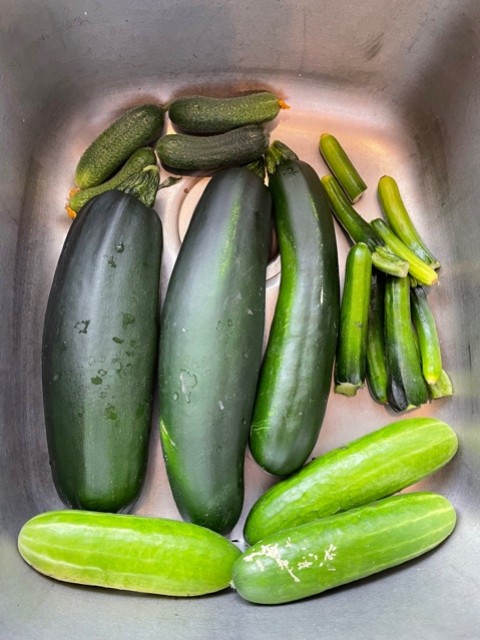 At the end of July, things got very interesting. And by very interesting, I mean who decided to plant all these cucubmber plants because 8 is twice as many as we need please help us we're drowning in cukes!

Last year was the first year we tried to make dill pickles. The recipe we chose was a disaster and would put the Dead Sea to shame with its saltiness. This year, I asked friends for tried and true recipes. We got 3. The first batch of Pops' Dills (not my Pops), I over processed after misreading the recipe. So we did it again the next weekend. A week later we had enough pickling cucumbers to try Christine's Dills and Joyce's Dills. 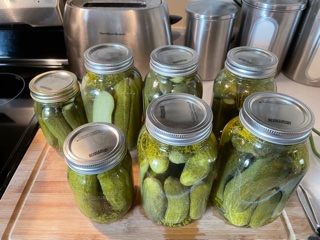 And then, at the end of the month, I hit a sale on raspberries. We cooked up a batch on a weeknight because as delicious as raspberries are, they spoil very quickly and they wouldn't have made it to the weekend without turning moldy. 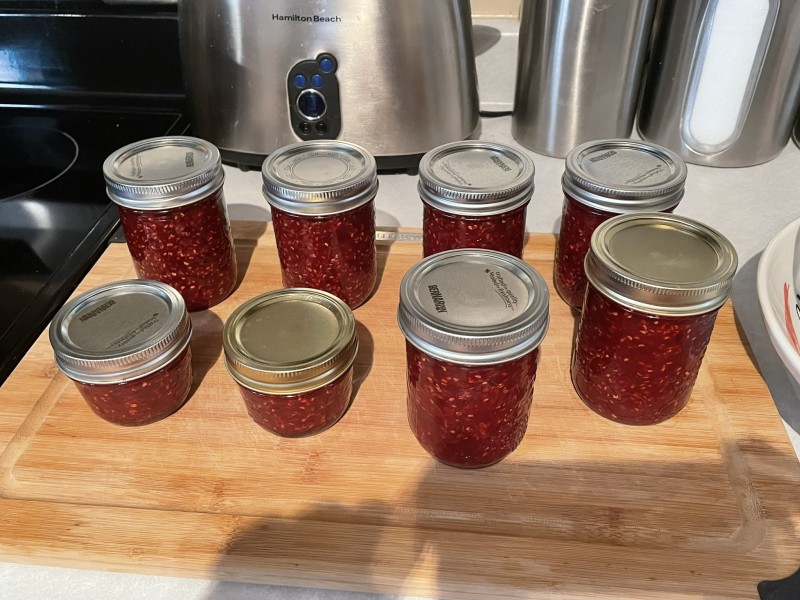 Oh, yeah. And Ross wanted to see how his underground veggies were doing, so we pulled one carrot, two onions, and one potato plant. 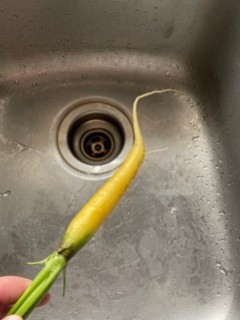 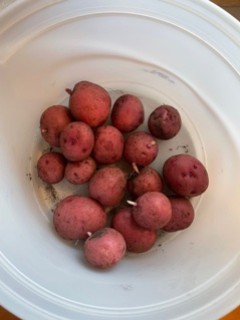 Two potato plants (of the 6 we planted) yielded 550 g of potatoes, about 1 1/4 lbs. We decided to let the other two boxes/4 plants continue to grow, but we replanted some of the tinier potatoes into the spot where we pulled the rhubarb. These potatoes took about 10 weeks to grow. All of August and September and the first week or two of October (Thanksgiving) is about the same period, so we're hoping to get a second crop.